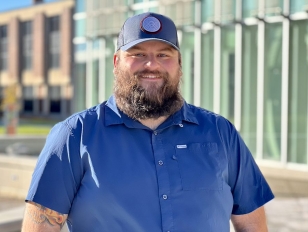 When Cody Crist graduated from Maryvale High School, he served as a military police officer in the U.S. Army at two stateside bases. After severely injuring his knees in a training exercise, he saw the career he had envisioned stretching out for 20 years or more suddenly evaporate.

“I went for an MRI and the doctors were amazed I was even walking,” said Crist, who is now a senior at Buffalo State College. “They sent me for surgery and were unable to fix it.”

Medically retired with honorable service in 2017, Crist was sitting in the Army’s out-processing unit, which is intended to help soldiers acclimate to civilian life, when he had an epiphany.

“I realized I wanted to go to college, not only for a bachelor’s degree, but also a master’s and possibly a Ph.D.,” he said, “so that I could do something positive for the world.”

He combined his longtime love of the outdoors with a fascination with the night sky into an earth sciences major and a geology and astronomy double minor. After taking a few community college courses, Crist transferred to Buffalo State his sophomore year and is on schedule to graduate in May 2022 as an honors student with near-perfect grades.

“Buffalo State’s earth sciences program is known to be really good, and I wanted to take part in it,” Crist said. “I’m so glad I did.”

The former soldier whose daily life was scripted for him found his stride on campus with multiple opportunities to lead.

“I’ve achieved a lot at Buffalo State,” Crist said, rattling off a list of accomplishments that include a 3.96 overall grade point average (GPA), a research fellowship, and the chance to work as a teaching assistant in multiple classes and serve as president of Buffalo State’s Astronomy and Geology Club. “I set really high goals for myself and crushed almost every one of them.”

After learning about the Muriel A. Howard Honors Program from a fellow student last fall, Crist realized he qualified, applied, and was accepted.

Gary Solar, associate professor and chair of the Earth Sciences and Science Education Department, recommended Crist for the college’s Undergraduate Summer Research Fellowship Program, which provides students with a $2,500 stipend to pursue a project.

Crist spent the summer researching the changing structure of migmatite (mixed composition rock) found at the base of Mount Washington in New Hampshire. He’s now analyzing the data and will share his finding at the Geological Society of America’s Northeastern Section Meeting in March and at the campus’s 24th annual Student Research and Creativity Conference in May.

Crist has also worked with Kevin Williams, associate professor of earth sciences and director of the Whitworth Ferguson Planetarium, on an independent project, planning shows for the new planetarium, which opened to the public in October.

“Learning the intricacies of the planetarium has been amazing,” Crist said. “It’s a cool and well-developed system and structure. I’ve loved every minute of it.”

One show he’s creating, “Beyond the Milky Way,” gives an expanded view of the universe and will be shown this semester. Another slated for spring is about black holes.

“My entire life, I’ve been curious about what exists outside of our Earth,” Crist said. “I wanted to do something with very deep space and something we don’t know much about.”

“Cody has a real desire to learn new material and to expand his experience with different equipment,” Williams said.

Crist noted that the Science and Mathematics Complex (SAMC), where the planetarium is located, is an excellent facility he’s watched evolve during his time on campus. The final phase of a 10-year renovation project was recently completed, and the college held an official ribbon-cutting celebration in October.

“Having the planetarium, research labs, rock-processing lab, and departmental offices in one centralized location provides so much for students,” he said. “Not just the equipment, but also the mentorships available there have helped me grow. I have the knowledge I can use for graduate school; I feel prepared.”

Crist is now researching graduate programs in geology with the long-term goal of earning a doctorate and opening a geological consulting firm.

He’s come a long way from the day he sat in the Army’s out-processing unit, injured and unsure.

“There have been a lot of challenges along the way,” he said with a smile. “I’m thankful for every single one of them because they made me the person that I am today.”